Integrated Starter Generator and motor control systems developed by Sosaley for two-wheelers. In addition to managing PMSM motors, these control systems are connected to the ECU via CanBUS and GPS systems for navigation.

The Sosaley Technologies two-wheeler ISG (STWISG) is a full-featured control system developed for and in conjunction with Lucas-TVS.

Tested extensively on realistic loads in the labs of Lucas-TVS, the STWISG is capable of controlling PMSM motors with a high level of accuracy.

STWISG works with three sensors. One is a hall sensor to read data for the PMSM motor, the second a reluctance sensor to read the vehicle speed, and the third is a temperature sensor.

Though the STWISG works in 5 modes, it is built as 3 major functional blocks. In the first block, we built a powerful and accurate power supply to deliver power from the battery to all the electronics including the sensors.

In the second block, the STWISG acts as a power generator. It takes energy coming from the PMSM motor, modulates and cleans the signal, converts AC to DC, and feeds the energy back to the battery. The objective here was to maximize energy regeneration. Sosaley and Lucas-TVS have together worked on the STWISG to suit Indian conditions, and optimize the regeneration by delivering 10-15% more energy to the battery than what was felt possible. This way, the two-wheelers that use STWISG will be able to drive a long distance and offer more ‘fuel’ efficiency.

The third block is the starter/motor mode. In this the objectives were simple:

All these were achieved well within the pre-determined parameters. Sosaley developed all the drivers needed as well as the signal modulation and smoothening logic.

Using three Hall Sensors to read motor data, the controller uses a six-step commutation logic for exact control of the motor. Ta, Tb, and Tc timer values are fed into a PWM register and a graph analyzed to study the effectiveness of the controller. We have managed to achieve the accuracy needed in terms of the gaps between the timings and a perfect sinusoidal wave. 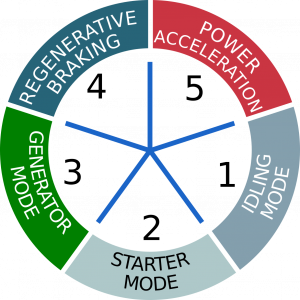