Batteries are critical components of literally every electrical and electronic device we use. Batteries store energy in chemicals and, when needed, deliver electrical energy. Different chemical compounds are used to store energy.

Every battery has three more elements – an anode, a cathode, and an electrolyte. Together, they form the primary building blocks of the battery.

Some of the popular and common elements used for storing energy in batteries are:

Most of us consider batteries to be fit and forget. Whether it is the car battery, batteries on our remotes, clocks and watches, torchlights, invertors, or, UPS, we start worrying only when the device starts misbehaving or stops working. Even in a car, most of us don’t even look at the battery indicator on the dashboard and are surprised when, one day, the starter does not turn.

A battery Monitoring/Management System, on the other hand, watches the battery 24/7 reading data from measurable parameters of the battery. Then using formulas standardized by IEEE, it calculates and predicts the life of the battery. The critical task of any BMS is to warn the user of  a potential breakdown.

Once a battery is deployed, BMS can measure certain parameters and calculate the SOH. It is important to remember that SOH calculation is always an approximation.

The parameters that can be measured to arrive at SOH are the following.

Other factors that may also affect SOH are self-discharge, ability to accept a charge, age of the battery, the temperature of battery during its previous uses, total energy charged and discharged.

We will now discuss each one of the eight parameters listed above. You may wonder what each of these parameters has to do with each other. Independently, maybe, nothing. But inside the battery, these parameters depend upon each other for the proper functioning of the battery. If one parameter fails, it pushes all the others into collapsing like dominoes. 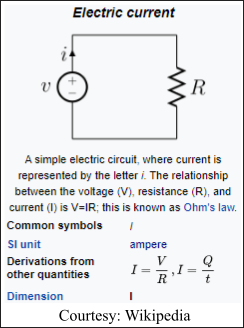 Battery capacity is measured as ampere-hours or ‘Ah’. Ah measures the electromagnetic force between the conductors that carry the electric current. Electric current is the rate at which electric charge flows past a point.

In a battery, the capacity is subject to the nature of the chemicals that are used, the quality of the materials used, and other factors.

The difference in electric potential between two points is called voltage. The difference is generally defined as the work needed per unit of charge to move a test charge between the two points. The derived unit for voltage is named ‘volt’. In the International Systems of Units, 1 volt = 1 joule (of work) per 1 coulomb (of charge). More commonly, the definition for volt uses power and current where 1 volt = 1 watt (of power) per 1 ampere (of current). This has more relevance for our discussion.

In batteries, a voltage represents either a source of energy (electromotive force), used energy, or stored energy (potential drop).

Internal Resistance of the battery

Whenever this sum exceeds the threshold limits specified by the manufacturers, then the health of the battery starts to deteriorate.

In an ideal situation, one cycle of 100% charging and one of 100% discharging are considered to be one cycle count of the battery.

For improved battery lifetime, it is often advised to charge the battery until just 80% and not discharge it below 20%. Such cycle counts are dependent on the battery manufacturer and type of the application the battery is subjected to. Battery’s life is generally quantified in charge/discharge cycles by the manufacturer and, after undergoing a certain percentage of this defined number of cycles, the battery’s health starts to deteriorate.

Batteries are supposed to be operated in environments that are defined by the manufacturer. The specifications include ambient temperature as well as the temperature at the terminals. For every increase of 1 degree, the capacity of the battery can get degraded by 2-5%. The terminal temperature is the first indicator of potential anomalies inside the battery. This particular parameter has to be very carefully watched.

State of Charge and Depth of Discharge: 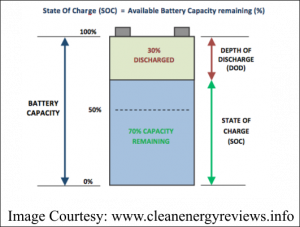 According to IEEE-1881, the State of Charge (SOC) is defined as the remaining capacity in a battery expressed as a percentage of its full charge capacity.

The depth of discharge is estimated from the state of charge. In other words, SOC = 1 Minus DOD.

Watching SOC and DOD and analyzing their movement over time will provide more reliable indications of the SOH of the battery.

Pure lead thin plate starting batteries can be charged the fastest, up to 100% of their rated capacity. But, that is a rare exception. For most lead-acid batteries, you should set the charge current between 3-10% of the battery capacity. If your battery is rated at 50Ah, the charging current should not be less than 1.5 amperes and never more than 5 amperes.

Following this rule will extend the life of your battery.

A BMS measures as many of these factors as possible and arrives at the state of health of the battery.

Understanding the SOH of a battery is critical. Take the example of a large battery bank used to power an emergency UPS system. If one battery starts failing, it will have a cascading effect on nearly all the batteries. If one battery is delivering at say, 10% of its stated capacity, the UPS system will simply make up for the loss by over-discharging another battery.

This situation when left unnoticed will gradually spread and destroy the entire battery bank.

Sosaley’s BMS is designed just to avoid a situation like this. Today it is watching 1000s of batteries in a large number of UPS systems. Next time you get fresh milk at home in the morning, remember to thank Sosaley BMS. It is ensuring that the freezers that are used to store the milk are never down for even a second.

About the Author: Jagannathan S

Jagan is a design engineer who has been working on Sosaley BMS for over 3 years now. He does a lot of research and helps others in defining the algorithm for BMS calculations. He is passionate about batteries and electric mobility. He strongly believes in 'stay hungry, stay foolish' as a mantra for life. Sometimes one wonders if he is pushing the mantra too much.