A Gateway for interconnecting disparate networks. Ideal for factory floors, and large industrial and logistics areas that use equipment from multiple suppliers. Get data from Modbus into your smartphones, and send data to centralized servers or the cloud.

In networks, a gateway provides connectivity between one discreet network and another. Gateways are different from routers and switches. They can operate at any of the seven layers of OSI and can use more than one communication protocol. A network gateway provides interoperability between networks and devices and also acts as data translators. In it’s simplest form, a gateway can simply move data from one network point to another, using a communication methodology that is different from the ones used by the network points.

In general, a GSM gateway is referred to one that is used for VoIP communication.

Sosaley’s GSM Gateway, on the other hand, is used for data networks in a factory, industrial, or any environment where you need to link disparate networks. It can talk to multiple networks, get data, act upon the data, or, simply push the data to another network.

GSM Gateway from Sosaley Technologies acts as both a transmitter and a receiver.

In the receiver mode, the way the Sosaley GSM Gateway behaves depends upon how it is connected and configured. In the simplest form, it just pushes the data to Modbus, Ethernet or another network to which it is connected.  It can also connect to a user device such as a smartphone that can use GSM communication. There, applications can present the data to the user, raise alerts, or, take instructions from the user, and send the instructions back to the transmitting network.

The Sosaley GSM gateway can operate on 2G, 3G, or 4G networks. The GSM transmission speed is user definable.

As a modern bridge between disparate networks, the Sosaley GSM Gateway is an important and integral part of Sosaley’s IoT offering. 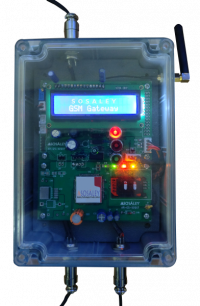 Get in touch with us today to understand how we can fine tune the Sosaley GSM Gateway for your specific needs and use.
Contact Us
Developed for an industrial parts supplier, this version of the Gateway gets data from multiple sensors attached to a Modbus gateway. Connected through an RS232C/485 serial port, it logs all the data that comes from the Modbus gateway. On the other end, the GSM Gateway can connect to up to 10 smartphones whose numbers are entered on the Gateway. Internal logic built-in into the Gateway analyses the data on a continuous basis. As soon as some set thresholds are crossed, an alert is sent to the designated smartphone. A simple app on the smartphone enables the user to send control instructions back to the Modbus gateway.

The GSM Gateway has been programmed to understand multiple data types such as pressure, temperature, steam flow, etc. A user-friendly application on a PC allows the user to build tables and conversion logic for any data type received from the Modbus gateway. 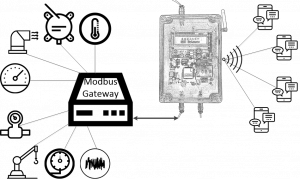 This version was built to be used in hostile environments such as a seaport or an airport. Using two GSM Gateways, you can transport data from one network to another where cabling is difficult or has not been installed. At both ends, the GSM gateway can read and convert data both for transmission and for receiving at the receiving end. You can feed the data into some other functional network, store the data, send it to the cloud, or process it on a PC. The options are endless.

This version of the GSM Gateway has been designed to be weatherproof and can be mounted atop masts and other high points.