A Bit of Background

A Nielson Media research in 2009 showed that more that 91% of users skipped advertisements in DVRs. Though DVRs have largely been replaced with streaming videos, even that does not bode well for advertisers as viewers would rather pay than watch an advertisement. So how does an advertiser grab the attention of his audience?

Billboard advertising is traditional out of home (OOH) advertising methodology that is quite popular. Their size and short catchy messaging do catch the attention of drivers and passengers. Traditional roadside billboards have a predominant 66% of total annual revenue.

Billboards are followed by street furniture, transit, and other formats. This includes avenues such as buses, subway, trucksides, food trucks, taxis, trains and buses, gas stations, train and boat stations, and, airports.

Static advertisements in these locations are slowly being replaced with digital advertisements. Enter DOOH. Digital Out Of Home (DOOH), or digital signage, is a dynamic way of capturing your buyer’s attention. The advertisement can be localized catching the attention of the viewer in a much stronger way. 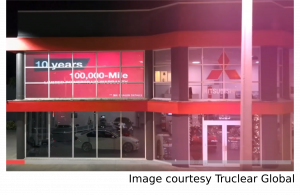 TrueClear Global (TCG) owns a patented way of Nano coating walls and glass panes that convert them into digital signage panels. Video and images of high resolution can be projected on these coatings. Projection can be done from the front or rear of the panel. TCG is using this technology to create advertising opportunities in transport hubs, shopping malls, storefronts, convention centers and hundreds of other places.

Sosaley worked with TCG in developing the complete technology for accepting an ad medium in a central server and then playing it one or more of 1000s of local venues that the advertiser chooses. In about 12 odd months, Sosaley delivered the first version of the system, and TCG was able to implement it in multiple places including Madison Beverly Hills, Saks Fifth Avenue, and San Diego.

Sosaley is continuing to work with TCG in enhancing the features of the system, improving deliverability, and going up to 4k for videos.

The technology we have used with live videos is shown in our Media Management page.